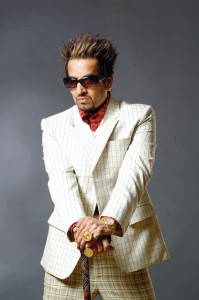 Jazzy B, or to give him is full name Jaswinder Singh Bains is the biggest Bhangra artist in the world known to millions as the Crown Prince of Bhangra. He is credited with modernising the Bhangra genre with his unique blend of western style music and the authentic Punjabi sound. Born in India but growing up in Canada, Jazzy B was exposed to hip hop, R&B and rock music during his upbringing which have come to influence his music.
The young Jazzy B learnt his craft performing as part of a group at Sikh weddings in Canada. It wasn’t until a work colleague leant him $5,000 to hire a studio to record his music that he was able to embark upon a professional career as a Bhangra singer. At the age of 18 moved to Birmingham in the U.K to pursue his musical ambition and he still lives in the city now.

Now Jazzy B has 13 albums to his name and a stack of hit singles. He is a regular face on the international music circuit as he plays to audiences around the world. On his 2005 Balle-Romeo Tour 65,000 people turned up to his gig in Canada which is testament to his immense popularity.

A music video which emulated the hip hop rapper style got Jazzy B in hot water after two of the actors in the video were uncovered as notorious drug dealers. They were later convicted and their Hummer limo, which also featured in the video, was seized by police.

The Bhangra singer’s distinctive dress sense has been, by his own admission, “a blessing in disguise” as he says it made him stand out from other artists. His recognisable spiky black hair and dark glasses have become a trademark look.

In 1993, Sukshinder Shinda helped launch the career of Jazzy B by producing his first album entitled Ghugian Da Jorra. The success of the album led to the instant recognition of Sukhshinder Shinda as a quality Bhangra record producer and Jazzy B as a rising Bhangra artist. The two real life friends decided to keep working as a team and have produced a total of thirteen albums together.

Jazzy B has also tried his hand at acting taking up cameo roles in a handful of Bollywood films. However the Bhangra star has no plans to hang up his microphone and take on acting full time as he describes music as being his “true calling.”